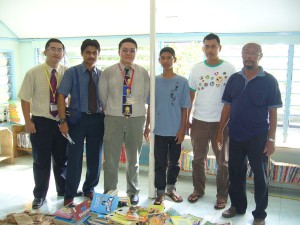 The community medicine posting for Batch 5 began with a high note. Over a short period of 5 days, the 59 students of Batch 5 came, surveyed, and stole the hearts of all the villagers of Kampong Bujang.

We began our endeavor in Kampong Bujang on the 26th of November 2007. On arrival to the village, we were greeted with enthusiasm and were quickly allotted to our respective foster families. Having settled down and adapted to our new surroundings, we wasted no time in scouting our survey houses. The whole day was spent interviewing the various households that were allotted to us. Besides conducting our surveys, we also assisted the villagers in their competition to be the best village in the country. We assembled with the welcoming party of the village and together, with the various societies, we marched into the village hall. It was an experience to cherish, and not to mention a tanned one at that, medical students marching in our lab coats, in the hot afternoon sun to make a formidable impression for the judges.

Besides this, we held a ‘mini’ health campaign for the people, setting up booths for diabetes mellitus, hypertension, and fundoscopy. Of course none of these activities would have been flawless if it hadn’t been for a little help from our awesome lecturers. But the best night of that week, and I believe everyone who attended the gathering would agree with me, was that of the farewell. Both the students and the villagers joined hands in putting up performances like the ‘Silat’, Indian classical dances, sketches and last but not the least, the grand finale of the night: the Dikir Barat. Throughout the show, light refreshments were served to the guests and door gifts awaited those who entered or left the hall. Towards the end of the celebration, the whole batch came together for photo shoots with the various lecturers in attendance as well as with their respective foster families. 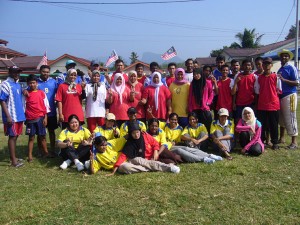 The final day we spent in the village, we spent in the form of a sports day. Games such as football, netball and tug-of-war were organized, setting the students up against the villagers. This was the first time we saw the villagers as something more than just villagers, since they quite adroitly swept us clean of all the prizes. Even the little ones had a whale of a time with ping-pong games and so on. 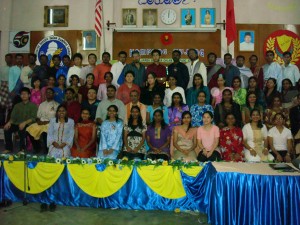 Perhaps the most touching of all, was the ceremony where the foster family ‘returned’ the students to their rightful statuses. For the last time, the families got together, taking photos that would last a life-time, before bidding their farewells to the students who had, for 5 amazing days, truly been a part of their family.