Location of buildings inside the compound

The day started off well, although cloudy but did not prolong too much. Reached SIK DHO at about 8.30am..but the session with District Health Officer, Dr.Ishak, started at 9am. He introduced himself and carried on to know about us. Finishing the “ice-breaking” session, Dr. Ishak started off his presentation to us all regarding SIK DHO and the other Klinik Kesihatan under its in-charge. He explained to us detailly regarding the task that they carry out daily and periodically.

First and foremost, Dr. Ishak explained and gave us the overview of the Sik District. According the Dr. Ishak, the area in the district is 1634.6 KM^2 which is the largest district in the Kedah State. However, the health problems arised from the district is relatives poorer to the other state. The population is not too large, the estimated population at 2010 is 7,000, and the rate of growth of the population is 1.8-2.13%. The main economic sector of the residents are mainly agriculture, which is tapping the rubber. Malays and Siam people (imigrated from Thailand) are the 2 major races in the district, then it is followed by chinese, and Indian.

After that, Dr. Ishak also explained the organization cart of the Sik Health Office.( as shown by picture) 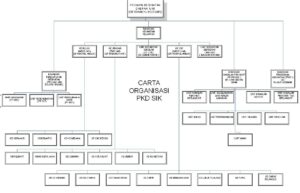 He went on to project to us some datas collected through annual analysis regarding the type of diseases and performance statistics. Due to private and confidentiality, the details of the statistics should not be released by the Health Office. Hence, we will roughly explain the overview of the statistics which are discussed with Dr. Ishak.

Some of them are:

a)Cholera. In 1993, there is a highest prevalence in the community. However, in the following years untill 2009. The number of cases are reduced to zero. Last year 2009. There are 2 cases of the vibro cholera infection in the community. The infected patients are 2 local citizens. At the same time, there is a outbreak of cholera infection in the Kedah and Perak. Sources of the infection was sought out. It was believed that those who had their food in a specific food hawker in Alor Setar was the cause of the outbreak. Unfortunately, 2 citizens in the Sik bought the food and gave to the victims. At the end, the 2 citizens were infected.

b)Tuberculosis.It remains as high prevalence in the District. The reason where the number is still increasing is due to: high incident rate of reported diabetic patient in the comminty (as a result of immunocompromised) and HIV/AIDS infection. In the survey done by health office, they found that more than 50% of the diabetic patient would develop pulmonary tuberculosis.

c)Malaria. It is not common in the urban area in the Kedah state, however, in the Sik District, anually, there are some cases of malaria infection. In 2010, the 6 local citizens were infected, and 8 are come from foreign who stay in the community. It was believed that the sources of infection is come from the foreign, notably the Soutbern part of the neighbor country which is north to Malaysia.

d)Syphilis.Even though the number of cases are as low as expected. Dr. Ishak had addressed that the actual number of cases of syhphilis are masked. The reason is because most of the infected patients go to seek for GP, GP will not report to the health office. Moreover, the number of cases reported anually mostly come from female. This is because of the first booking antenetal screening test of VDRL done in all pregnanted women.

e)HIV. The reason of the HIV infection is due to intravenous drug users.

f) Chikungunya. Patient developed the symptom of backache, arthritis and fever. Last year 2009. There is a outbreak of the vector borne disease which is carried by the Aedes albopictus not only in the Sik, but also in the Padang Terap and Kubang Pasu. At least 5,000 cases were recorded in the Sik Disctrict, it is not included the mild form Chikungunya in certain patient. According to Dr. Ishak, once one of the family get infected, the insect-borned disease will spread quickly among the family members. The outbreak and spread of the disease in the Sik community was due to the following reason: The main economic sector in the community is tapping the rubber. Rubber who is sealed would be sold or carried by a lorry driver (who was infected from unknown reason) to the factory everyday. During the ‘journey’, the disease will spread epidemically from one region to another region in the community. Fogging is not effective to control or reduce the number of cases during the outbreak because almost all mosquitoes carry the virus are infected. Suprisingly, Chikungunya outbreak brings us to a amazing result,that is following the outbreak of chikungunya in 2009, the number of dengi cases was dropped drastically to 4 cases ( from January to March 2010, as compared with 2009, number was far more higher) in Sik. Dr. Ishak deveoped a hypothesis – A mosquito which host the Chikungunya will not live symbosis with the Dengi Virus. They will eliminate the dengue virus hosting in the same mosquito.

g)Dengue. Dengue remains high common in the community. However, in year 2010, the number of cases was dropped to 4 (result updated until March). It was believed that there is a connection between the dengue virus and chikingunya virus in disease transmission.

Besides these informations, Dr.Ishak also elaborated on the administration part like the AUDITING, ACCOUNTING. He told us that on district level they only do the accounting. The accounting task itself is a big job. In that:

b) Send tender out for things which cost more than RM10,000

c) They also type out letter for things which cost more than RM100. No cash buying is done beyond RM100. The letter acts as an invoice, officially stamped. Upon receiving the product the pay will be settled through cheque.

d) The staffs salaries, working in DHO, are also taken care of locally by the DHO.

2.30pm onwards we resumed with our second half schedule. Mr Jamil, an assistant, brought us around the DHO, showing us the variety of department which existed within the vicinity.

Then, we headed to District Clinic in Gulau and in Jeniang. We ended our 1st day of our DHO posting and the exciting part of this posting has just begun..