Sometimes morning is just beginning to a very bad day. Mornings are simply more fun in the city side of course and our favourite things to wake up to – the sun in the sky, the dimsum aroma on the rise, and a wakeup call from your latest lover, or your best friend! However, as much as we appreciate the concern, our downward spiral in on the upturn! We’ve been welcomed with warmest regards by the district health officer PPKPK Mohd Zin Mohd Yasan. We met him at the lobby and was brought all the way to the conference room (Bilik Mesyuarat). 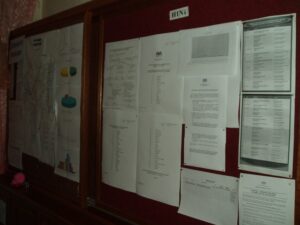 While waiting for him to get the copy of the schedule, we eventually found a lot of useful information on the notice board. Most of them were regarding H1N1, natural disaster(flood), Chikungunya and others.

After that, Mr. Mohd Zin gave us a brief introduction on the district health centre, person in-charge, and the schedule of the day. As the MNHO – Dr. Aishah bt. Jusoh(UD54) will only be free in the afternoon, Mr. Mohd Zin started off our posting with discussion about Vector borne disease, as there were many cases reported recently. PPKP Azran bin Samsudin, an officer in charge of Vector control department then gave us an hour talk on vector control programmes’ structure, functions and job responsibilities, vector control measurements, and the laws on vector control. We were told that in Padang Terap, dengue cases had dropped but the mortality rate was still high. No filariasis and malaria case being reported so far for this year. As there were dengue cases around, the officer then brought us to Kampung Barohkas, the village involved which was around 10 minutes rides from the district health office. Then we were separated into 2 groups, four each and followed two of the district team for larval survey within the distance of 250m surrounding the house with the reported case of dengue. 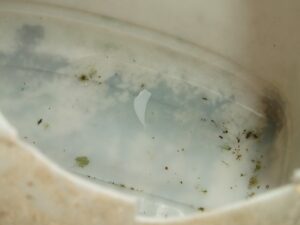 We followed two officers into the house to do a larval survey. We searched each and every corner of the house looking for any clogged clean water, where there’s a possibility for aedes mosquito larval to breed. Look carefully at the right bottom picture and you’ll be able to see a few larval. Leshin was taking the sample after instructed by the officer. It looks simple, but some skill were required in order to obtain the tiny little larval. Then the collected sample, will be kept in a capped bottle, labeled and send for laboratory identification. According to the officer, 5-6 larval are needed to fulfill the requirement as an adequate sample. How to identify it? Look for the S-shaped movement tiny stuff. Look carefully at the bottom of the bottle. The red colour insecticide spray was used during the larval survey on suspected clogged water and in water sources that are not required anymore, in order to kill any unnoticeable larval. The right picture was taken when Alfred was spraying it on a fruit shell. We called out the morning session after the insecticides spray and went for lunch with a take-home message, wear the mosquito repellant before you go for a larval survey. After a restless morning, it’s finally our favourite time, lunch time. Unfortunately, sigh~ tasteless meal. Then we were off to our lovely homestay for a short rest as our next session was to start at two in the afternoon with Dr. Aishah bt. Jusoh(UD 54). She had prepared the powerpoint slides for us, and it consists of the structure and function of various levels of health care, number of health facilities from the national level to the district level, health personnel and their responsibilities and last but not least the budget allocation. They also showed us how’s the Agrofog(left) works as well as the ULV(right). The difference between two of them besides the size is that Agrofog can be used for both aqua and oil based fogging, while ULV was merely limited to the usage of aqua based. For your information, Agrofog costs around RM3600. This is the protective mask which they wear while fogging and the way to wear the mask was demonstrated. Basically it’s a N95 mask with additional ear piece for the ear protection from the noise caused by the agrofog. Here’s where our group mates Leshin and Ting were carrying the Agrofog that weight 16kg. After the introduction, we then followed their car to the village we visited this morning for fogging at 6pm. On arrival at the village, one of the Pajero belonging to the district health office drove along the village instruct the villagers to come out from their house while leaving their house door open but the house’s windows closed. The kampungites were quite cooperative. Then the fogging started and after half an hour, it was done. This is the photo of us with the fogging team. We then called it a day.