Our day started with meeting Mr. Hasani, the officer from the HIV/AIDS & TB unit. They’re actually leaving for a community activity in a kampung, which we were asked to follow.

As we were following them from behind, we did not realise that we are actually heading towards KAMPUNG TEPI SUNGAI!!!! There was quite a lot of them who attended. Sorry, i forgot to take a picture of the crowd.

Next is just something funny i wanted to share. If you people know about the big black bag that i used to carry to class, you’d know that it looks like a small luggage bag right? So today, as me, Denise and Yogeeta were heading towards the hall, an officer came and welcomed me and said, “Hi, you dari mana ah? (Where are you from?).” I answered AIMST University, then he gave me a very confused look and said “Oh..from AIMST ah?” Then I said, “I tagged along with the officers from Pejabat Kesihatan Dearah, we are here to attend the talk.” Then he just laughed and said “Oh aku ingat u pemberita, sebab u bawa beg besar..(I thought you’re a reporter, because your bag is huge!)” HAHAHAHAHA.

And without further delay, the talk started at 915am by an officer from JAKIM (Jabatan Kemajuan Islam Malaysia). He touched briefly on issues like drug addiction, and how to avoid it; or if one is tested to be HIV positive then what are the support groups and treatment offered by the MOH. I would say it was more like a motivational talk to the villagers and to educate them regarding needle sharing and encourage them to be devoted to God so that they can stop their addictions for commonly Heroin and Morphine.

The factors which cause people to start “trying” drugs (dadah):

Had a short tea break at 1045am which we were invited to an air-conditioned room with the VIP’s. Then the talk was continued by a Family Medicine Specialist (FMS) UD 54, Dr. Nor Aziah from KK Bakar Arang. She spoke on the treatment and side effects of drug addiction.

She mentioned about the Methadone Replacement Therapy in which this is used as a substitute for Morphine and Heroin and is used to reduce the addiction to them. It can only be prescribed first by a Medical Officer and then subsequently by a Pharmacy Officer. It will take effect after 1 hour, peaks at 4 to 8 hours. It is taken once a day for A YEAR. However, the success rate is only 1 out of 100.

She also mentioned that it requires a lot of disciplince and family support to really keep to this therapy. There are a few criteria of inclusion and exclusion to this therapy. 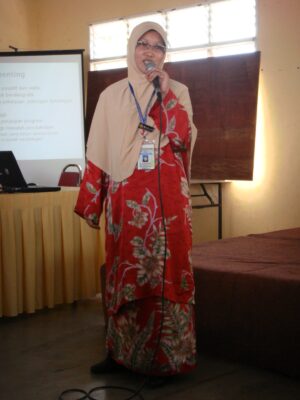 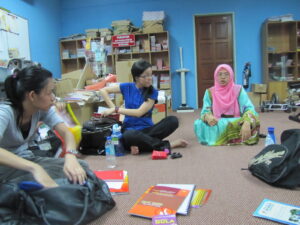 This unit works on different themes each year, e.g.:
2006: Makan secara sihat (Eat healthily)
2007: Stop smoking (Tak nak merokok)
2008: Healthy ways of handling stress (Bijak tangani stress)
2009: Emphasis on the 3 themes mentioned above
2010: 10,000 steps a day (Seribu langkah sehari) – to encourage the public to exercise and do more physical exercise e.g. ladies will be home to do household chores, and men are encourage to go to the gym after work, and use the staircase all the time. They can be healthy by losing weight and prevent some illnesses like Artherosclerosis, Cardiac diseases and obesity causing Diabetes Mellitus.

The 2 activities which are also carried out by UPK:

Program Doktor Muda (Young doctors programme) – currently over 28 primary schools in the Kuala Muda district have the Doktor Muda club, where students of Standard 2, 5 and 6 are selected to join based on their academic performance. 30 students with good results will be selected from a school and they have a list of activities on e.g. first aid techniques which would expose them to ways of handling an injury and etc.. Before year 2009, the officers from UPK will visit schools from time to time to follow up on the activities of the Doktor Muda club and also teach and brief them regarding various health issues based on a module they follow. After year 2009, the teachers in charge will give the briefing to the students after being taught by the officers from UPK. Teachers will know how to handle their students better. They also have the Konvensyen Doktor Muda (Young Doctors Convention) once in every 2 years, in the district and also state level. They also organize activities like drawing posters competition, story telling competition, sketch, health quiz etc.. The activity books that are used to record the activities carried out by this Doktor Muda programme.

PROSTAR – Program Sihat Tanpa AIDS untuk Remaja started after the alarming statistics of HIV/AIDS cases. Under this programme, a camp called PROSTAR Facilitator Camp is done by selecting a few adolescent students to participate in this camp, and later they serve as a facilitator to teach their peers about what they have learnt in this camp. Other activities under PROSTAR include gotong royong, and Explorace (something like Amazing Race but informational and beneficial to the students).

That’s all for a very tiring but productive day!