An extra activity by the Law and Enforcement Unit on a bright and hotttt Saturday afternoon in which an operation of issuing compounds/summons to those caught smoking in prohibited areas, and this time the operation is in HSAH. We’re very lucky to be able to join because this only occurs twice or thrice in a month.

We gathered at HSAH at 230p.m.. The officer in charge is Mr. Adam Abu Bakar from the Unit Penguatkuasaan (Law Enforcement Unit). A very helpful officer who shared very useful information with us. 9 of us are divided into 3 groups, as there are a few other volunteers from HIV/AIDS Unit, Vector Unit and officers from BAKAS helped out too. Mr. Adam said that this is because the Law Enforcement Unit is lack of staff and because they are dealing with people who smoke in prohibited areas, they will need more people in a team to help “arrest” the person red-handed (i.e. with a cigarette that is still LIGHTING and that they have it in their mouths.), because there were cases when the person who was caught was unhappy and he tried to beat up the officer in charge that day and it became a police case. So to be safe, they will have few people in a team who can handle the offender better.

Once they are caught smoking in a prohibited area, their cigarette will be confiscated and put into a bottle, called the universal bottle like this. The bottle is sealed and labelled. And the label that is used looks like this 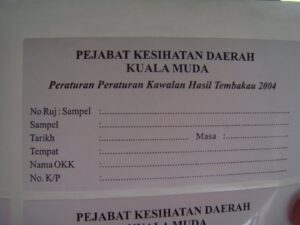 No. Rujukan sampel (Sample’s reference number) which is given by the officer who issues the compound to the offender.

Sampel (sample that is taken from the offender, i.e. cigarette)

They will then be issued a compound like this. We could not take a sample of this sheet because it is a serial-numbered document (note top right corner). Loss of any one of this document will have to be reported to the police.

If you’d look at this document properly, you will be able to see this line starting with “Akta Makanan 1983 peraturan” – now for adults (above 18), it will be peraturan 11(3), like this.

This compound will be issued to them and a fine of RM 500 (for those above 18) and RM 50 (for those under 18) will have to be settled within 30 days in any DHO. Failure of which will be brought to court for further actions This is called the Senarai Pemeriksaan (BONGKAR) / Check list?

This will be filled up by the officer for the sample that has been collected from the offender as a proof which will be kept or brought to court if they are not able to pay. On the left is Mr. Adam.

Unfortunately, we were not able to catch any offender this afternoon. Nevertheless, we enjoyed and learnt a lot about the operation.