Posted on December 12, 2007 by MyAiMsT | Tagged with: Non-Communicable Disease of Control

We attended the Blindness Detection Programme or rather known as ” Program Kebutaan ” in Klinik Kesihatan Tawar. This is an activity arranged under Non-communicable Diseases Control (NCDC) unit.

We were briefed by Penolong Pegawai Perubatan Encik Amir regarding this programme. This Blindness Detection Programme is the pioneer programme in the country. Its center is based in Klinik Kesihatan Tawar. Therefore, all referrals from any health centers in the district of Baling would be sent here for evaluation before being referred to Sungai Petani for consultation by the opthalmologist.

In 1950, it was recorded that 38 million people in the world were affected by blindness according to statistics prepared by WHO. Later on, a study was carried out in Malaysia from year 1996 to 1998. It was discovered that 2.71% (518680 people) out of 19 million people were affected with blindness.

We learnt on how the screening process for blindness was done, the various methods of investigations and the different types of treatment provided.

The Blindness Detection Programme unit is very active as they not only provide this service every Thursdays in Klinik Kesihatan Tawar, but also participate continuously in many of the health campaigns arranged by the district health office with the hope of creating awareness in the community pertaining the importance of healthy vision. 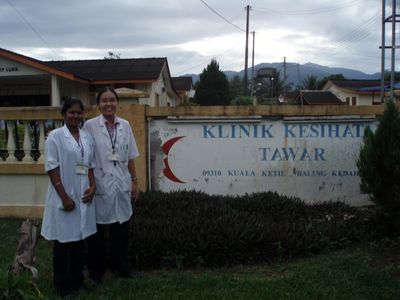