The day started of with a short meeting wid Dr. Lely, our group facilitator. We were then told to gather at the Unit Kawalan Penyakit Bawaan Vektor (Vector borne disease control unit), the head of which is Mr. Rosli Abdullah. 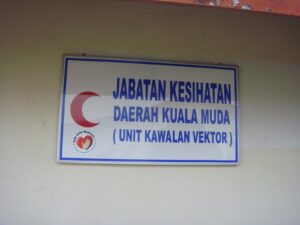 The man on the right is Mr Rosli with his colleague, Mr. Perwira. 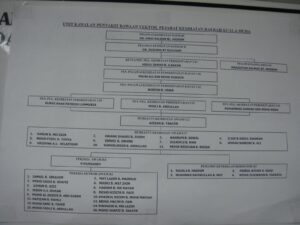 This unit is made up of 30 plus people in which you can refer to the organizational chart above.

The objective of this unit, sorry I only have it in Bahasa Malaysia.

The 3 common indices used are: Aedes index, Brateau index and Container index. The most commonly used one is Aedes index, which is also the most sensitive of all. We also learnt about the symptoms of Dengue, which I’m very certain all my classmates would be more familiar than I do. E.g. high grade fever, myalgia, body ache, Rashes, retro-orbital pain.

Just for your information, as of 29/6/2010, there are 166 Dengue cases reported in Kuala Muda and 112 cases are tested positive. In year 2009, there are 272 Dengue cases which were reported and this year, they aim to reduce this number by 10%. However, there are difficulties in achieving this. E.g. when the DHO send their staff for fogging in a Dengue epidemic area, 100% of coverage cannot be achieved because some houses are not occupied and some are locked during the time of fogging, and they are not allowed to enter a house if there’s no residents or the residents who are at home at that moment are under 18 years old. Mr. Rosli also told us that it is rather difficult to educate the people to prevent the breeding of Aedes mosquitoes.

It was also reported that there are over 30 schools in this district which have breeding grounds for the Aedes species!

Health talks, campaigns, and even massive cleaning (gotong royong) are some of the activities which are carried out by this unit as a measure of educating and preventing vector borne diseases especially Dengue.

At about 11a.m., we drove to Taman Keladi (near Metro Hospital) which there was a Dengue positive case reported in the past 1 week. The officers were divided into 2 teams, 2 in each where they go house by house for Aedes survey. The questions they asked include the name of the owner of the house, and anybody who recently had fever in that house. The officers also check their bathroom (for stagnant water in the bath-tub-like thing, you guys know that one cement walled “pond” where they store water for bathing purposes) for mosquito larvae. They also look around at the house compound for air bertakung (stagnant water) and educate the people to pour in this powder form of poison, aka Abate used to kill adult mosquitoes and larvae. 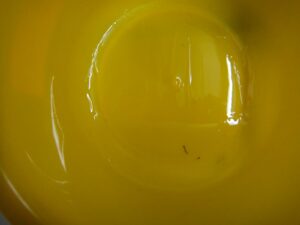 The dead larvae that I mentioned This satchet of Abate can be used for 2 houses. They just have to drop a bit in their kolam mandi and this water will still be safe for bathing. He also mentioned that children may be allergic to it, but not adults. Uncle Ramachandran guiding us along the way, answering to things that we do not understand! Highly appreciated! The officer Mr. Ahmad knocking outside every door of Lorong 45 Taman Keladi The officers interviewing the residents Lunch after Aedes Survey, the day is carried on with a brief discussion on the reporting system in a case of an outbreak. The unit head, Mr. Rosli is notified and investigations will be carried out to confirm and his subordinate will carry out their tasks e.g. talks, fogging and health education in schools if it involves students.

We also managed to have a look at the models of mosquitoes in the unit. Some of the pictures I took. 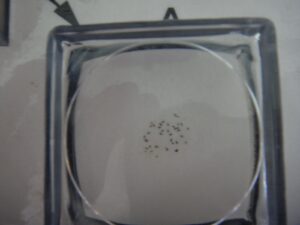 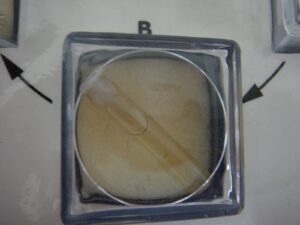 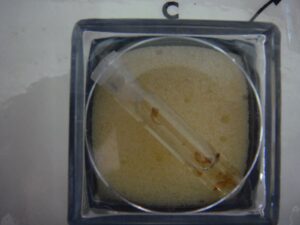 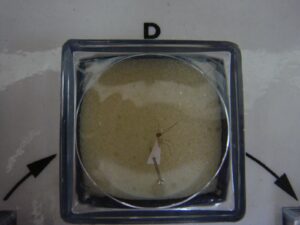 At around 630pm, we gathered at Taman Keladi again for their fogging session. The equipment used is Agrofog 35 which looks like this They first started with Thermal fogging, from house to house including the interior of the house using Aqua-Resigen which costs RM 150 per litre!! It is a water-based formula which does not leave the oily and sticky stuff in the house, which is not understood by many. A lot of people think that they are using an oil based formula and many residents have refused fogging in the interior of the house. We were not allowed to touch the Agrofog 35 because of its very high temperature after use. The person who does the fogging is assisted by another officer who is in charge of recording the data and which house is locked or not occupied. The ULV which sprays another type of oil-based poison known as Actellic in the surrounding housing estate, also used in town areas (Kawasan perbandaran). However there are side effects to human bodies. The poison that is mixed according to different proportion has to be finished on that day and it cannot be kept for the next day.

The officer also mentioned that health talks and gotong royong which were held here did not receive much support by the residents there, which is why Taman Keladi remains as one of the Dengue epidemic areas in Kuala Muda. Have a great day tomorrow to all the groups!